How to deal with hate towards you

I wrote this earlier today as it’s been something on my mind the last couple of days. It’s probably a lot deeper than most of the content I put up and I feel my mind wouldn’t even have been in a place to grasp the message not too long ago, but I’m going to post it in case it resonates with one other person.

“There is nothing either good or bad, but thinking makes it so” – Seneca

We choose how we look at things. We retain the ability to inject perspective into any given situation. We can’t change the obstacles or perceived ‘bad things’ themselves- that part of the equation is set but the power of perspective can change how the obstacle or ‘bad things’ appear.

As some one who puts his thoughts, opinions and life applications out there for the world to see, I largely leave myself open to criticism about my appearance, my ideas or philosophies. A lot of these can be perceived as ‘negative’ comments aimed in my direction.

‘Say nothing, do nothing, be nothing” – Aristotle 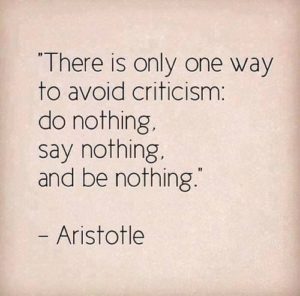 I made a choice a long time ago that how I approach, view, contextualise any of that ‘criticism’ aimed in my direction was my choice on whether I choose to accept it or not.

In every aspect of your life, it’s your choice whether you want to put ‘I’ in front of something (I am angry at those comments, I am annoyed someone would say that, I am disappointed that person used those words). These add an extra element: ‘you’ in relation to the criticism, rather than the criticism itself. The criticism is not you and you are not the criticism. Those two things are separate so let them go and don’t let it consume your entire being. We go through our entire life ‘worrying’ about what other people think; we make decisions based out of fear because our parents, our friends or even strangers (we are the social media age after all), think!

‘When you try and please everyone, you end up pleasing no one” – Bill Cosby

With the wrong perspective, we become consumed and overwhelmed with something actually quite small. Through the readings of Seneca and other Stoic philosophers, I can now see from the perspective that sometimes the criticism or negativity aimed in our direction is actually the other persons way of consciously or subconsciously dealing with their own demons.

CHOOSING TO FEEL HATE IS YOUR DECISION!

“One cannot feel hate, if not hate exists inside them” – Chin-Ning Chu

It took me a long time to realise that a lot of negativity that I aimed towards other people was a reflection of my inner self and said more about me than about the person I was aiming those emotions towards.

I remember a close friend doing me a bad turn once; I hold loyalty and respect as two of the main characteristics I search for in my closest network (which is now 4, maybe 5 people) and ‘talking behind someone’s back’ or to put in modern days terms ‘being two faced’ is probably the less desirable characteristic a person can hold in my opinion. Hearing back destructive words and negative stories from people who were supposed to be your ‘closest friends’ can be a difficult to process- it can lead to a lot of built up hate and trust issues.

Luckily those circumstances can make you considerably stronger and more self aware if you allow a shift in perspective. Off the back end of that particular situation, two things happened:

It allowed me to really conceptualise what kind of people I wanted in my life and what I valued most in people. I now have a inner circle of people who I trust with my life. Tony Robbins talks about how ‘success leaves clues’ – but I think ‘failures leave just as many’ – you learn from your failures and bad experiences.

It also thought me that ‘hate’ was an emotion that had to be first within me for it to be even aimed in the direction of another person. That particular situation allowed me to search for my own inner hate and made me ask the question, ‘what was it that I hated it about myself that was manifesting itself in my feelings towards another person?’

Tony Robbins regularly talks about the power of questions; in this circumstance, I asked the right questions and I found the right answers. I realised that it was my own demons that I had to first deal with before I could release the hate towards another person. Now when I feel moments of hate towards someone, something or some idea, I recognise it for what it is, just an emotion; so I let it in, allow it to be felt and then let it go. 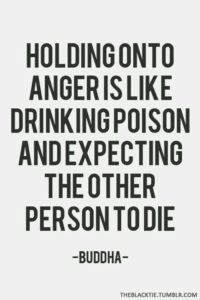 WORDS ARE THOUGHTS AND IDEAS, NOT BULLETS!
Hate like criticism is something that has to be within you in order to project it onto somebody else but how to deal it is down to how you see it. My closest friends have referred to me on several occasions as ‘bulletproof’ when they see negative comments and words aimed in my direction. I’m not bulletproof- the reality is, I see words as thoughts and ideas and not bullets.

For one, thoughts and ideas change- my philosophies, opinions and entire life perspective is considerably different now to that of two or three years ago.

I remember family members telling me ‘how stupid’ I was for leaving my teaching job and trying to start my own business. Years later, the same people talk about how ‘they knew I was going to make it’ – the circumstances changed, more information was now available (i.e. enough time had passed that the subjective vision of ‘success’ was now perceived to have been achieved) and their opinions changed!

The original ‘you’re stupid’ was now forgotten, relegated to non-existence in the past and was replaced with ‘I knew you could do it’. This is how people are; those thoughts and opinions are held for a moment in time and people change their thoughts and opinions all the time (normally when more evidence is given to support or negate the idea but irrespective is still just an opinion or idea).

We as an entire species once ‘knew’ the world was flat but Aristotle argued in his writing that the earth was spherical, because of the circular shadow it cast on the moon during a lunar eclipse. We now ‘know’ the earth is round!

‘Everything we hear is an opinion, not a fact. Everything we see is perspective, not the truth’ – Marcus Aurelius 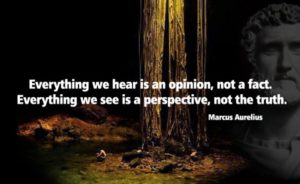 But when these thoughts and opinions are aimed in our direction, we consciously or subconsciously hold on to it like our first-born child! Realising that every word that’s ever been aimed in your direction is a thought or opinion of that moment in time can liberate you to do anything in your life. The thoughts you have in your own head are what are important. If you let other people’s words dictate the direction of your life, you will never get what you want.

When you start to see the world and all the opinions and thoughts in it as just that person or group of people’s perspective, it can liberate you like nothing else.

Opinions and thoughts are what are felt in that moment, they’re not bullets – they’re words, they’re not even words cemented in stone – 99% of the time, they’re words that float in air that we take in and allow dictate the direction of our lives.

Its nice to hear people refer to you as ‘bulletproof’ but again this is just an opinion of that particular moment – when you give words less weight, the damage they do becomes a moot point. One of the reasons I love my life is that regardless of the quote unquote ‘negative’ and/or ‘positive’ comments aimed in my direction; I’m going to continue to do what I’m doing and just ‘do me’. When you can truly let go of the thoughts and opinions, because that’s all they are, your world is your oyster. Just go ‘do you’ and be happy.